Home / Jio Services / Only Jio users can see such free of cost all IPL matches, no more than 1 rupee

Only Jio users can see such free of cost all IPL matches, no more than 1 rupee

April 06, 2018
Jio Services
Utility Desk The 11th season of the Indian Premier League (IPL) starts on 7 April. At the same time, the final match of the tournament will be held on 27th May. That is, 51 days of nonstop cricket is going to climb. Many times due to busy schedules or away from home, we can not see this match. In this case Reliance Jio has brought live streaming of IPL matches for its users free of charge. For this, they have to install JioTV app on the smartphone. 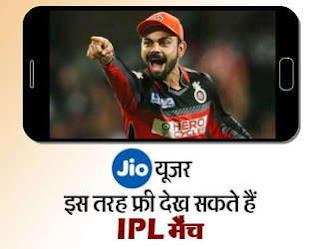 JioTV can view the user live channel on the app. The company claims that more than 550 channels have been given to it. There are more than 100 HD channels in it. These include a number of sports channels. IPL is being done on live telecast star sports channel. These channels are also included in the list of JioTV. That is, the user can see the direct live match here.
With Star Sports also:
Channels of Star Sports are already included on the JioTV app. Many matches of Team India have been shown on this app. The list also includes Star Sports's HD channels. The JioTV app's service is completely free now. That is, the user has to spend only data to watch for a video or a live match. I.e. one rupee will not be spent separately. Please tell that Live is giving its users unlimited data with 4G speed according to plan. By the way, the match can also be seen on Star Channel's App Hotstar.
Click here to view in Hindi
Only Jio users can see such free of cost all IPL matches, no more than 1 rupee 2018-04-06T21:13:00-07:00 Rating: 4.5 Diposkan Oleh: VISHNUEDDITS